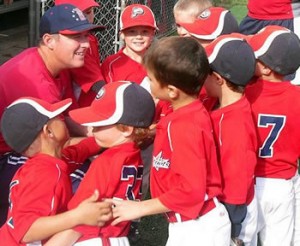 Jay Lucas loves coaching baseball players on all levels…league teams, all-star teams, travel ball, tournament teams and camps at every age including the high school level.  He was recently the pitching coach with former MLB All-Star Jack Wilson at Thousand Oaks High School and is currently the Freshman Head Coach at Skyview HS after recently moving to Nampa, Idaho.

Players learn to respect the game and their coaches, as they take responsibility for their actions, mature, and learn what it means to be a good ballplayer, a good teammate and most importantly, a person of good character.

Don’t expect Coach Jay to teach one specific “system” or take a “one size fits all” approach. Rather, he likes to coach each player as an individual, making adjustments and improvements to their natural mechanics and techniques. “Get ahead, stay ahead” is a key concept. If young players get quality instruction and repetitions at an early age, they will consistently be the more advanced players all the way through their youth baseball experience. He believes athleticism and talent become more important after puberty and into the high school and college years, but attitude and effort must be emphasized first as a solid foundation.

“I am thankful for the amazing coaches I had growing up (my dad, Bill Berger, Roy Coppinger, Larry Smith and Rich Hill in baseball as well as Pat Finnegan in soccer).  They helped mold me into the player I was and the person I have become.  Naturally, I now enjoy giving back to the players I get to coach along with the joy of coaching my own sons (Easton, Branson, Grayden & Jackson).”

Does this all sound like something you want your player to experience? If so, great! Jay is now offering camps and clinics. Contact Jay to ask about personal and small group lessons with your player(s).